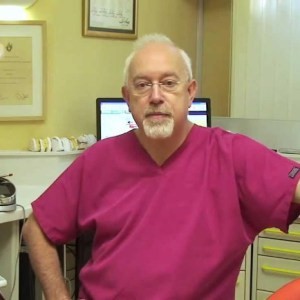 Dr John Roberts B.Ch.D was born in Liverpool and attended the Calday Grange Grammar School on the Wirral. In 1977 John went on to study dentistry at Leeds University, qualifying in December 1981.

He started his first job in Huddersfield in 1982. After working in a variety of practices in the local West Yorkshire area, in 1987 he set up his own successful NHS practice in Rochdale.

During this time John was continuing his Post Graduate education, not only in Dentistry, but also learning about complementary and alternative health care. He found that blending these styles of care together meant that the style of his practice changed.

In 1994 John made the decision to leave the National Health Service as he was no longer prepared to use certain materials and follow certain protocols, as he felt it was not in the patient’s best interest.

The practice continued to thrive and John continued with his education, the main emphasis of the practice was general dental care and looking at a patient’s dental and overall health.

Mercury Free and bio-compatible dental care was a big part of the new direction for his practice. Improving the health of a patient’s gums and getting rid of dental infections not only with dentistry but using homeopathy and nutrition became more of a priority. Working alongside Osteopaths and Chiropractors looking at improving jaw joint function, resulting in improvements in the whole body alignment this began to shape the theme of the practice.

In July 1995 John felt that he wanted to give something back so he embarked on running the International Academy of Oral Medicine and Toxicology conferences with the late Dr Anthony Newbury. This set up the UK leg of IAOMT (IAOMT.org is a worldwide organisation promoting safe bio-compatible dentistry).

He has to date run more courses on the subject of Holistic, Mercury free dentistry than any other practitioner here in the UK. He organised a very successful course in Oxford in 2000, with delegates from 35 Countries.

Also in 2000, John embarked on a 2 year degree course at Capital University in Washington DC.  This meant travelling to the USA, once a month for 4 days and in June 2002, John gained a second doctorate degree in Integrative Medicine.

The Rochdale practice was too small for John’s hopes of an Integrative Health Practice and so in March 2003, he moved the clinic 18 miles down the M62 to Huddersfield, where he opened the doors to The Integrated Health Practice.

The ground floor was dedicated to Dentistry and he invited complementary health practitioners, Osteopaths, Doctors, Psychologists, Physiotherapists and a variety of other health practitioners to work on the upper floor meaning that patients could find more of their needs are catered for under the one roof.

The practice although ever changing and modifying has continued to grow achieving John’s goal of an Integrated Health Practice.

John continues to give lectures and talks to dental and other health professionals both here in the UK and over in America.

In 2010, the practice changed its name to make more distinction between the Dental work and the Holistic Therapies that are run upstairs. It is now known as Cote Royd Dental Practice.

John’s desire is to run a dental practice using the latest technology and modern techniques and thinking, to provide dental care and prevention wherever possible. If patients require additional health care, John works with a team of Osteopaths, Chiropractors, other body workers, medical practitioners, energy medicine workers and detox practitioners here at Cote Royd or by referral.

John is a father to three boys; Christopher, Alexander and Benjamin and is a grandfather to Erica, meaning in his free time he is kept busy. John’s main interest outside of dentistry is keeping fit and healthy, especially swimming and he has taken this into diving, but only in warm waters!

November 2008 saw John doing charity work in India. He felt he wanted to give some of his time and skills to people who were in need of help and hadn’t had any dentistry in past. It was a very rewarding time for John, not only helping the patients but also living and seeing a culture and way of life that is so different to what we generally experience.